It had been two hours and panic finally succeeded in flooding my senses. No more brave face; hope no more.

Where was I? I had seen the same landscape the entire time I was lost – trees too tall; vegetation too dense; forest too evergreen.

I looked up at whatever sky I could find and let the panic flow through tears. Defeated and tired, I plopped down in despair.

I sensed a movement. Panic again.

Suddenly space was curved, the forest a stretched blur; sky, streaks of blue on a green smear. Entire space cramped into a tunnel around me. I squeezed my eyes shut to kill the hallucination.

Very slowly, I opened my eyes. Tunnel still there. Unthinking, I started crawling.

Prose Challenge – Write a story with a word limit of 125 words on the theme of ‘timelessness’.

Bonus point for each of the following: 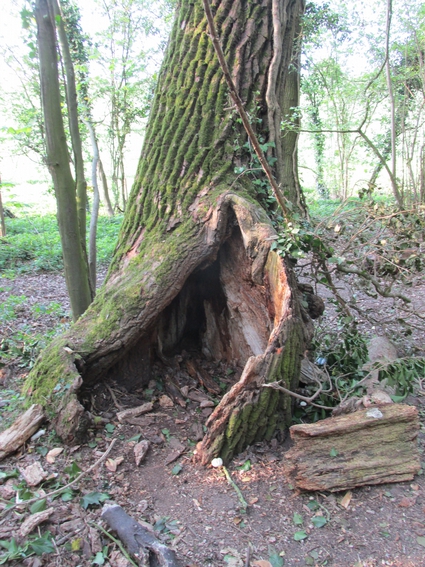 Some primal instinct of survival must have surged through my body. There is no other explanation for how I could have run so far into the woods.

I glanced back when I thought I had lost them. In that moment of folly, the entire world came crashing in a heap of green and blue and brown. I tripped over a tree root and fell on my face.

Fear overwhelmed me. Trembling, I struggled to get up. That’s when it caught my eye – that wide gaping hollow at the base of the guilty tree; strangely dark.

The sound of approaching footsteps spurred me to dive into the hollow. Refusing to breathe, I inched forward to flatten myself against its inside wall. On reaching it, I let out an involuntary yelp; the wall was ice cold, in the middle of the tropical forest.

I panicked. Surely they had heard me now! Confused and desperate, I searched for any means of escape. That’s when I saw the mark of a human palm on the wall. Would it open, if I touched it? With no time to decide, I had no choice. I couldn’t imagine anything worse than a violent death. I placed my hand on the wall.

I have been here ever since. Over the years, I have often looked back at that moment of desperation. Every single time, I regret placing my hand.

Flash fiction in response to Weekend Writing prompt hosted by the lovely Sammi Cox. Thank you so much, Sammi! This week’s prose challenge.

Write a story with a maximum word count of 250 words that tells the story of a character or group of characters who discover a secret doorway.  Your story must include the following elements: