We all seek help. In fact, we all NEED help -no matter how positive we are or how seasoned. Every now and then we are stumped; faced with an unfamiliar situation that makes us unhappy – either it is because we let us ourselves down or someone else has; someone or something touched a memory that we have tried hard to overcome. Sometimes it is just because someone has been downright mean (including us). Guilt, anger, envy, anything really can trigger the feeling of “what the hell am I supposed to do now?!”

Our first go-to friend in most such cases – is the internet. Maybe because that is the easiest, most anonymous (so we think, at least), perhaps fastest thing to do. Sometimes, if we are lucky, we get exactly the answers that we had been seeking. But then how often does that happen?

What the internet really provides us, without fail and on all occasions is PERSPECTIVE. We get to know two very important things within just about two minutes.

The best picture of the Internet is perhaps, that of a reassuring friend – who nods her head no matter what we tell her, smiles back and offers comfort “You know honey, ….”. And we come back feeling light and relieved; with a feeling of having been understood and with a feeling of having understood our own situation and others’ as well. She has given us the perspective and wisdom that we so lacked in an unfamiliar, albeit very personal situation. We are all aware of the “what” in our life. Mostly though we are at a loss for the “why”. And that is where she helps us most. When we put the “what” and the “why” together, slowly, we can chisel away at the “how” – How do I change this situation? And we do eventually, in our own way.

So is Internet the panacea? Probably not. But we should still seek her for getting the choicest ingredients to make our own concoction.

Dying alone is the worst curse. He had been dead for three days before I realized I hadn’t seen him. We had hardly known each other. Just a nod of the head as I passed his home. But still, I felt miserable. I had to do something for him. So what if he was dead?

I decided to help clean his apartment. The little there was enough to tell me that he liked flowers and the color red; collected chopsticks. I also found a pair of old, cobwebbed shoes. That meant, he wasn’t born a cripple… I wonder, what happened?

Flash fiction in response to Friday Fictioneers hosted by the lovely Rochelle Wisoff.

It was the first time I had seen my mother completely break down and cry. Not the welling of eyes or the gentle, lonely tear deserting it. I witnessed the violence of emotions breaking through a barrier of space and time, unseen by me and known only to her. I stood still, incapable of reacting. Was the lady sobbing uncontrollably really my mother? Where had these tears been all these years? My mother had always been cold, distant, stoic. An alien in a city she migrated into. Till that day, I had never known my mother was even capable of such strong emotions.

What was all the more surprising was that this torrent had been triggered by a place that had absolutely no resemblance to its past. Everything had changed. The homes, lanes, trees, even the smells. I realize now that the changes, drastic though they were, could not have ebbed the deluge of memories. Just the “sense” of familiarity was all that was needed. The setting “felt” similar to the one into which I was born; into which my parents were born. It was the place where they had roamed the fruit orchards together, bathed in the village well, climbed trees, played with tops and screamed from the hills. The place where their friendship gradually morphed into matrimony and matrimony into parenthood. The place where they pieced together a space they could call their own. This place had been their asylum, their identity. This place then, left its searing mark on my mother’s life and beyond, on its destruction. The earthquake had not only shaken her world, it had shaken her identity. The once happy, talkative, dreamer was left broken amongst the ruin. Although my grandmother had recounted this tale on a number of occasions earlier, the true enormity of the tragedy was revealed to me by her tears on that day.

I recollected my grandmother’s words. The catastrophe had come unannounced on a day like any other. My mother was trying to feed an adamant me, then a one-year-old, on the porch. My father was in the bedroom, mending a broken chair. Suddenly, the earth started shaking violently with the rumble of distant thunder. Terrified, overcome by a mother’s instinct, she clutched me to herself and ran outside – just in time to see the building collapse into a pile of debris, my father included. It was probably at that moment that my mother lost herself. She stood still, staring at her wrecked life as I clung to her and cried. There lay somewhere, crushed under the weight of fate, the love of her life and her soul. Covered in gray dust, matted all over, she knew she had committed the unthinkable mistake. She had run outside instead of going inside to her husband. She had lived and lost her life. If she had survived, it was as only as a punishment for the unforgivable. She cried only after three days; days she had spent as a corpse. But the tears had been brief then and rarely breached thereafter too. Perhaps, she thought deserved every predicament that came her way; accepted her punishment as a means to redemption… Soon, being too poor and too broken to revive their livelihood, we had all migrated to the city to eke out a living.

As far as my memory stretches, my mother had only struggled. I am still amazed at the courage and resilience with which she spent her life trying to provide me with a decent education, often at much cost to her health. The only thing she held back though – was love. She never loved me and didn’t feel the need to be loved. She just needed to get by with living. It was my grandmother who taught me to love and accept love. Who knows how I might have turned out if not for her anchor while my mother drifted in a sea of misery.

The drift seemed to stall about 5 months back. Perhaps she had sensed the end was near. She wanted to return to her roots, her village and thus began her journey of forgiveness. Somehow, that journey changed her. It seemed to give her a semblance of long lost peace. With each passing day, her spirits rose as her health receded. She died last week…. I can’t say that I loved her with all my heart. But I can say that I cried like a child.

Requirement is to write a prose within 750 words using the optional prompt “I am amazed at her mountainous courage.”

This story runs like a personal non-fiction essay without dialogues. My modest attempt for this week. 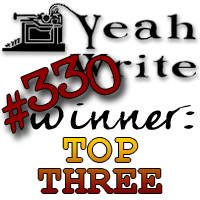