Some memories never fade. For Savitha, such memories are stacked from those of the annual festival in her village. The colors of the decorations of the temple, her village, and its people; the din of the loudspeakers – spouting a devotional song here and a film song there; the tales from Mahabharata and Ramayana and of course, the fair. It was a day of luxury when she could enjoy giant wheel rides, get a photo of herself, stuff herself with cotton candy and an assortment of sweets till she could have no more. On the day of the main festival, she would hold her mother’s saree as they sat in a line in front of the temple – each in front of the wood fire, cooking up Sakkarai Pongal as offering to the God. Somehow, that Pongal would be the tastiest she would eat that year.

It might have been three years since she even visited her village, ensnared in the daily routine of a mundane, city life. Some memories, however, sustain her.

Sakkarai Pongal: Sweet made from rice, lentils, jaggery, and milk. Believe me, it is so yummy (my mouth is watering as I am writing this!). 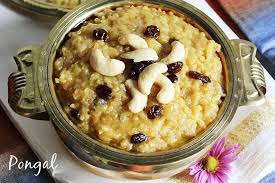 Such village festivals are held throughout Tamil Nadu in villages and towns. Extremely colorful, noisy and full of life. It is entirely impossible to capture the essence of these in 175 words….  Some images here.

Flash fiction in response to FFfAW hosted by Priceless Joy.